The World's Most Popular Bullion Coin, the Krugerrand, Now Released in Silver

ModernCoinMart and GovMint.com are bringing North American customers the chance to own the highly-anticipated first-ever Silver Krugerrand. 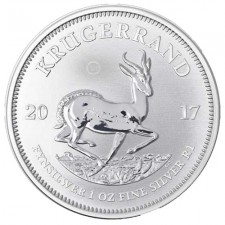 Sarasota, Florida, April 17, 2017 (Newswire.com) - The Gold Krugerrand holds the title of being the world’s first modern gold bullion coin, and is still one of the most widely traded gold coins around the globe today. It’s also one of the world's most popular investment coins, and has had such a monumental impact, that it is now being offered in silver. To celebrate the 50th anniversary of the Krugerrand flagship gold bullion coin, the South African Mint has struck the very first, legal tender premium uncirculated 1 ounce Silver Krugerrand.

To date, more gold Krugerrands have been minted and circulated than all other gold bullion coins combined. Because of the coin’s popularity, it has also been a great way to track the price of gold around the globe. The Gold Krugerrand’s popularity and investment value has made its new Silver Krugerrand counterpart highly-anticipated and hoped for by collectors.

ModernCoinMart debuted a test strike of the Silver Krugerrand at the Florida United Numismatists (FUN) Show in Fort Lauderdale, Florida in early Jan. 2017. It was the first time the coin was seen in person in North America. Both ModernCoinMart and its sister company GovMint.com now offer the coin for sale on their websites. The Silver Krugerrand has the same simple, classic design as the gold coin. The coin bears the face of Paul Kruger and the Springbok antelope, one of the national symbols of South Africa, along with special 50th anniversary Mint mark.

“ModernCoinMart and GovMint.com are excited to offer the first-ever 2017 Silver Krugerrand as the exclusive North American distributors for this coin,” says Steve Wolff, VP of Product Development of ModernCoinMart. “The worldwide popularity Gold Krugerrand has really made the silver version a great collector item. Proof and bullion versions of the Silver Krugerrand will also be released at a later date.”

To learn more about the companies and purchase the new 2017 Silver Krugerrand, visit ModernCoinMart.com or GovMint.com.

ModernCoinMart, established in 2004, has pioneered the modern coin market online. The company has a professional customer service team, offers free domestic shipping on all orders with no minimum, and strives to bring their customers the lowest possible prices. To learn more, visit ModernCoinMart.com.

For more than 30 years, GovMint.com and its related companies have been a trusted source for collector coins for over one million customers. With headquarters located in Minneapolis, MN, they are one of the largest retailers of rare and collectible coins in the country. To learn more, visit GovMint.com.